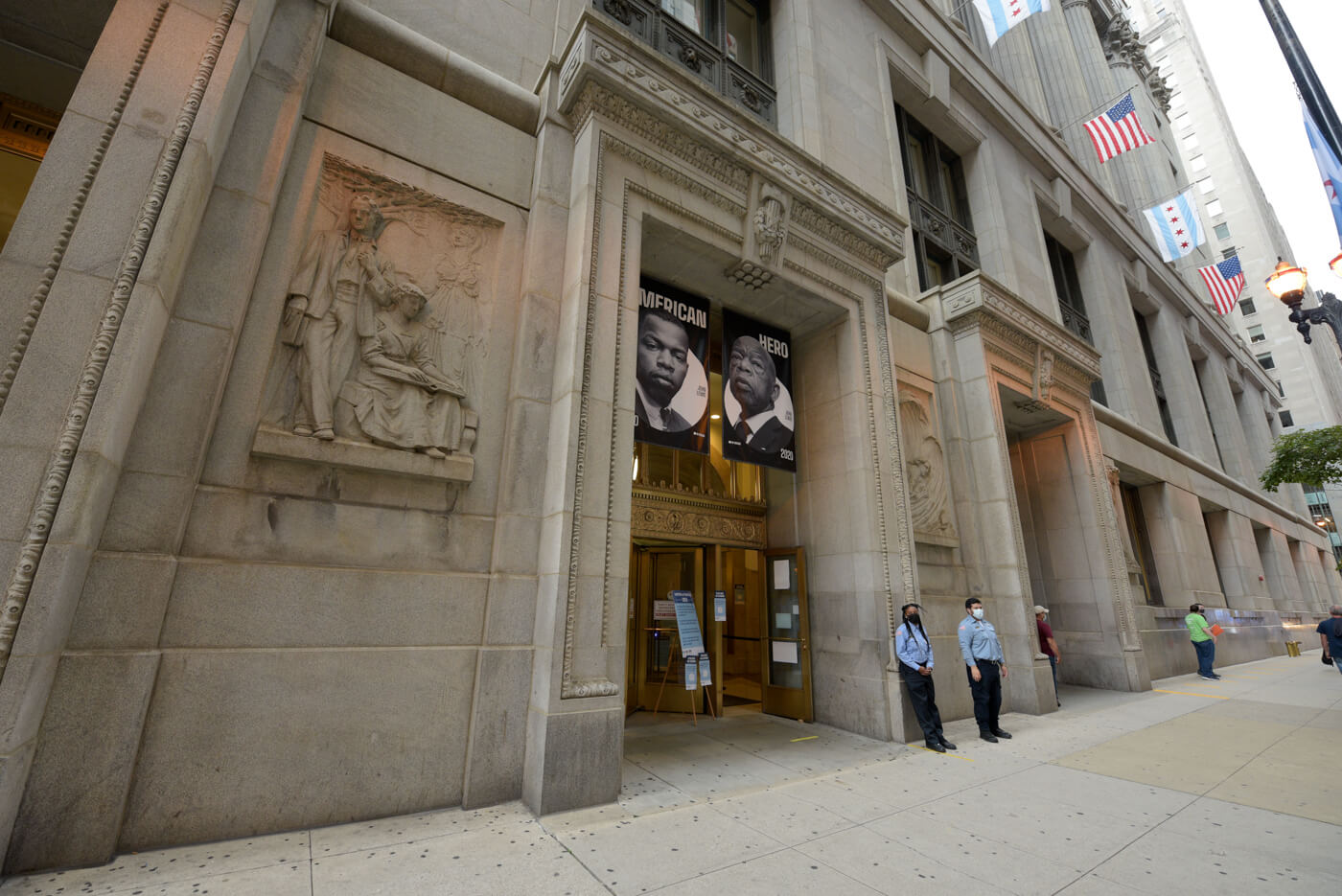 Mayor winked at summer violence in Chicago, but denounced protests on Capitol Hill.‍

What a difference seven months make. For Mayor Lori Lightfoot, it is a period in which she has forgotten a great many things, particularly her reaction to Chicago’s tumble into anarchy over the summer of 2020. While memory does fade with age, it is far more likely Ms. Lightfoot’s forgetfulness is a choice and the events of the past have likely been cast into a memory hole.

Shortly after 2 p.m. on January 6, as both Houses of Congress were debating objections to the ratification of President-elect Joe Biden’s Electoral College victory, a throng of supporters of President Trump protesting the 2020 presidential election descended on Capitol Hill. Moments later, a mob broke through barricades and entered the Capitol building. As lawmakers were escorted from both chambers of Congress by security personnel, angry protesters intent on creating violence and mayhem clashed with police, stormed both Houses and occupied the Rotunda. As demonstrators milled around in one of the most hallowed spaces in American democracy and inflicted damage on the complex, gunfire was heard. When the melee cleared, four protesters and one Capitol Police officer lay dead.

The worst breach of the Capitol since a British force looted and burned multiple government buildings in the District of Columbia during the War of 1812, what occurred on January 6 in Washington, D.C. was not a spontaneous expression of wrath. On the contrary, this was an organized assault on the heart of government. Police later learned the mob was armed with improvised explosive devices, had specifically positioned armed groups around the capital city, and had marked certain lawmakers for violence.

Critics of the president assert Trump incited an insurrection with his stories of election fraud and attempts to bamboozle some into believing the results of the 2020 presidential election could still be reversed. With these words of encouragement, critics charge President Trump alone inflamed passions and guided a mob to trespass on the Capitol. As the leader of the free world, it was certainly within President Trump’s power to placate the temperament among his supporters. Those who are critical of Trump's rhetoric also say the fact the president did not use the authority of his office or better judgement to dissuade protesters, some of whom he does hold a powerful sway over, from engaging in criminal behavior incriminates Trump for the turmoil which took place on Capitol Hill. While all of this is absolutely unacceptable, critics of the president have assailed Trump based on the few precious facts available. Predictably, House Democrats impeached the president on January 13 and Senate Democrats have vowed to pursue a trial even after Trump leaves office.

As the pandemonium unfolded in Washington, D.C., an outraged Mayor Lori Lightfoot opined on the episode on social media. Ms. Lightfoot took very little time to weigh all the facts. Fulminating from her preferred pulpit, Twitter, Ms. Lightfoot expressed her “disbelief” with the tumult on Capitol Hill and described the bedlam on the Capitol steps and inside the walls of the country’s legislative chambers as a disgrace.

A peculiar reaction to the mess in Washington, D.C., Ms. Lightfoot’s response to the disorder raises an intriguing question: If President Trump is to blame for this disgrace as the mayor contends, what responsibility does Ms. Lightfoot bear for the lawlessness which engulfed Chicago last summer?

Hypocrisy is a bipartisan affliction, but Lightfoot’s hypocrisy here is insufferable.

Although few could have predicted the death of George Floyd on Memorial Day while in the custody of the Minneapolis Police could have provoked such a violent reaction, fewer could have foreseen how Ms. Lightfoot’s lethargic response to protests turned the summer of 2020 into a golden period for rioting, looting, and crime in Chicago.

The same day Lightfoot berated President Trump, protests which would envelop Chicago for a week began to form. Although Chicago looked to Ms. Lightfoot for leadership and security, after a series of blunders and disastrous decisions, Chicago, a city of utmost sophistication, spiraled into unruliness. The protesters represented a wide cross-section of groups, with pro-anarchy group Antifa, and revolutionary movement Black Lives Matter mingling with self-proclaimed community activists, advocates for housing and criminal justice reform, and untold criminal opportunists. Over a period of several days, as the anti-police protests took on a violent character, Lightfoot’s instinct was to restrict police power, which ceded whole sections of Chicago to a mob. Stubbornly refusing to acknowledge the urgency for a strong police response, deterrence broke down, looters freely rampaged down Michigan Avenue and cleaned out retail stores of stock. By week’s end, certain areas of Chicago, particularly the Loop and Chicago’s affluent shopping districts, resembled a moonscape of shattered, burned out buildings, with overturned or disabled autos and debris cluttering streets.

A rolling crimewave carried out under the guise of “social activism,” the livelihoods, businesses, and welfare of Chicago residents were threatened. Though Ms. Lightfoot did impose a curfew and restrict traffic into the city, and did issue a few half-hearted appeals for peace, her reluctance to persistently and firmly condemn violence and refusal to demand protesters obey lawful police commands led to a staggering escalation in violence and looting and indulged the most radical and criminal elements of the protest. A failure to manage an emergency, Lightfoot's delicate and solicitous response to Left-wing political violence incited further civil disorder.

Though calm returned to the city, weeks later, in July, Chicago again exploded in unrest. Although brief in comparison to the mayhem which embroiled the city in early June, the one-day fracas in Grant Park began with demonstrators sniffing about “rights” and “privileges” and demanding the removal of what they deemed a symbol of America’s fraught racial history, the Christopher Columbus statue. Turning a public space into a zone of mass political violence, Antifa, Black Lives Matter and members of community groups united only by its rage with police laid siege to officers attempting prevent the toppling of the statue from its pedestal. An attempt at vandalism, for over one hour two dozen defenseless police officers withstood a bombardment from a filthy and most unkempt mass of humanity armed with umbrellas and frozen water bottles, rocks, and fireworks.

Though a direct attack on police and unmistakable criminal behavior, the mayor’s response was both predictable and tiresome: Lightfoot stated she supported First Amendment rights. A meek response to a skirmish which left two dozen police injured and public property defaced, though the mayor did submissively brand violent behavior “unacceptable,” and declare the scene “anarchy,” Lightfoot excitedly followed with an announcement encouraging the vandals to contact the Civilian Office of Police Accountability (COPA) to lodge complaints against police. While Ms. Lightfoot did accurately define what occurred, her contorted response was wholly insufficient in condemning in a consistent manner the onslaught against police or denouncing criminal behavior disguised as a legitimate protest. Worse, in a gesture which demonstrates timidity in the face of a mob, Ms. Lightfoot removed the Columbus statue days after the fray. Similar to her irresolute response to widespread looting and rioting in June, Ms. Lightfoot’s response to tumult on Chicago's streets in July demonstrated she was willing to place more vigor into doting over the lawless than providing safety to the lawful.

Words which did nothing to even minimize a mob action in two separate instances, Lightfoot, belatedly, dealt with the challenge of criminality somewhat in mid-August. Following a justified use of force by police on the South Side on August 9, an organized mob of hoodlums embarked on a looting spree. On this occasion, the looting was not contained to the Loop: It began on the South Side and later included the Magnificent Mile, where big retailers have flagship stores, and also involved two affluent commercial districts north of downtown.

Armed with the tools to pillage worldly goods, thieves arrived in the dark of night on the evening of August 9. Intent on plundering, individuals and members of organized retail theft rings absconded with merchandise valued in the hundreds of thousands of dollars and left a trail of destruction in their wake. As they fled, when confronted by police, those who ransacked the retail stores and tony boutiques targeted police with incredible levels of anger and hostility. In one particularly tense moment early on the morning of the 10th, police engaged in a brief exchange of gunfire with two autos driven by looters at the intersection of Michigan Avenue and Lake Street.

By mid-day on August 10th, as retail store employees and residents were searching through the rubble after yet another round of looting, Mayor Lightfoot responded to the bedlam by declaring what occurred hours earlier as “abject criminal behavior” and “straight-up felony criminal conduct.” Though moderately direct words, the worst had passed and Lightfoot used her platform to issue a resounding public rebuke in the direction of Cook County’s hapless state’s attorney, Kim Foxx. In a rare defense of police, Lightfoot demanded Foxx and Cook County judges commit themselves to upholding the law. Though the mayor’s words were firm, Lightfoot's purpose was to shift blame from her mismanagement of riot control to Foxx and the courts.

Bowing to a mob is tantamount to inciting a riot.

Inconsistency and hypocrisy are far from the worst sins one can commit in political life. Nonetheless, given the galling duplicity of Ms. Lightfoot’s tweet, honest and impartial observers can only draw the conclusion the mayor banked on the short memory of her audience and the tacit consent of Chicago’s passive media to escape the examination it deserves.

Though this was not Ms. Lightfoot’s first summer in office, 2020 was her summer in the spotlight. While on center stage, Ms. Lightfoot put on a terrible performance. A test of leadership is the talent to respond to a crisis. Beyond any typical crisis, the spate of rioting, looting, and vandalism which swept through Chicago last summer could have been defeated and further instances of political violence foiled had Ms. Lightfoot acted decisively and consistently anathematized Left-wing political violence. Ms. Lightfoot did not act resolutely; it set her against law and order and created a new world for the criminally inclined in Chicago.

After a summer of violence and chaos, Ms. Lightfoot has failed to recognize there is only one way to halt the unraveling of civil society in Chicago: Refusing the mob. History has recorded the mob preys upon those who gratify it. Ms. Lightfoot’s refusal to stand up to the mob, its aims, its demand to cancel or re-write history with the uncompromising language necessary to prevent criminal activity was not merely cheering on a band of social justice infidels or demonstrating ideological sympathy, but rather an indication the mayor is somewhat of the movement’s leader.

Ms. Lightfoot was justified to chide President Trump for his role in stirring a riot on Capitol Hill. Had the mayor exercised good judgement and offered leadership in the face of a mob over the summer of 2020, a crisis could have been averted. That Lightfoot did not robs her of legitimately claiming a sliver more of high ground from President Trump.