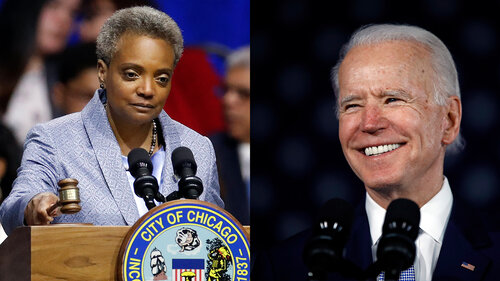 Will the mayor withdraw her endorsement of Joe Biden?

In the quest to obtain political office, an endorsement can be a valuable boost for an office seeker.  Though the potency of an endorsement in contemporary politics remains the subject of intense debate, over the past several decades, voters have witnessed office seekers on a national level frantically beckoning for the support of former presidents, former or sitting members of Congress, and the mayors of large cities.  Other than ex-presidents and elected lawmakers, endorsements from labor unions, for example, can drive voter turnout just as easily as clergy or influential businesspersons. More recently, and inexplicably, pop-cultural figures have figured prominently into the formality of political endorsements.  Though Joe Biden’s mouth should have ruined him long ago, he managed to survive several early primary setbacks and as the Democratic primary field winnowed, the former vice-president rose to the top of the Democratic dung heap to become the presumed Democratic nominee for the 2020 presidential race.  While Mr. Biden’s mouth and behavior has elicited some controversy of late, neither provoked Mayor Lori Lightfoot from suffering a twinge of conscience when she delivered an incredibly flattering tribute to Biden on March 6.

For those whose memory is blurred, on July 9, 2018, President Trump nominated Judge Brett Kavanaugh to serve on the U.S. Supreme Court to fill a vacancy created by the retirement of Justice Anthony Kennedy.  Though Judge Kavanaugh had established a brilliant record as a jurist presiding over 2,000 cases and issuing over 300 opinions in his twelve years as a Circuit Judge with the U.S. Court of Appeals for the District of Columbia, scarcely five seconds after the gavel had come down to open Kavanaugh’s nomination hearings in the U.S. Senate, Democrats seated on the panel turned a solemn ritual into a carnival atmosphere.  A four-day period in which the Senate Committee on the Judiciary was thrown into a tumult, Senate Democrats behaved contemptibly, engaging in a coordinated campaign of insubordination to the point of staging an insurrection.  Pitchforks and torches in hand, to disrupt the proceedings Democrats on the judiciary committee refused to recognize the lawfulness and validity of the hearings and often excitedly threatened to breach Senate rules in the name of their warped brand of justice.  In their campaign of innuendo and rumor, Senate Democrats delivered vague questions to the nominee, all of which were designed to imply Kavanaugh’s responses were tantamount to lying, to suggest he had previously engaged in questionable conduct, and to infer he was guilty of corruption.  Worse, in the rare moments his judicial philosophy was examined, Democrats on the panel routinely took unfair advantage of Kavanaugh’s reluctance to offer thorough interpretations on legal matters which he had yet to confront as a Supreme Court justice to presume he was culpable of moral crimes ranging from political opportunism to misogyny and racial blindness.  A harbinger of what was to become, the campaign orchestrated by Senate Democrats to defeat Kavanaugh, even if it meant destroying him, took place prior to a committee vote and occurred before psychology professor Christine Blasey Ford’s charges alleging sexual assault against Judge Kavanaugh were released into the national ether.

Although Kavanaugh believed he had survived the worst of it, shortly after the nomination hearings concluded on September 7, rumors swirled around Capitol Hill alleging his nomination was in jeopardy.  On September 12, The Intercept first confirmed suspicions, only disclosing Senator Dianne Feinstein (D-CA) had in her possession documentation of an incident damaging to Judge Kavanaugh’s appointment to the High Court.  One day following, Feinstein publicly acknowledged a letter concerning Kavanaugh; and three days after, Ms. Blasey Ford entered the public consciousness with her accusation Kavanaugh had assaulted her thirty years before.  Though few could have ever imagined how recklessly and irresponsibly Democrats on the judiciary panel could have behaved, they became more cavalier, harsh, and impetuous, as did the shameful tactics used by their Democratic colleagues in both chambers of Congress, Left-wing media, and members of the Progressive movement.  Mayor Lori Lightfoot is among them.

Amid the brewing controversy, a settlement was reached among senators to hold one additional day of hearings in which only Kavanaugh and Blasey Ford would be seated for sworn testimony.  Although the one-day hearing was scheduled for September 27, in the interim between the hearings Democrats and Progressive activists breathlessly paraded around unsubstantiated allegations in public and during appearances on Left-wing cable news programs.  A period which was dominated by theatrics and hyperbole, what was uttered by Democrats and Progressive activists in the intervening period between hearings was an attempt to impugn Kavanaugh’s character through innuendo or outright fabrication.  Similarly, in the period preceding the September 27th hearing, Democrats and Progressive activists grew more belligerent and began to amplify further unsupported allegations against Kavanaugh, notably the baseless, uncorroborated allegations leveled by Julie Swetnick and Deborah Ramirez.  Accounts which never survived strict scrutiny, both accusers took days to reflect on the inconsistencies in their stories, most of the accounts were absent any firsthand corroboration, and, naturally, details of both accusations were filtered through attorneys.  Though the wild shifts in the narratives of Kavanaugh’s accusers should have been a sufficient warning over what was occurring, when Ms. Ford finally sat under the blinding klieg lights in the Dirksen Building on September 27, she, too, left numerous doubts over whether any assault ever took place.

Flanked by her attorneys Debra Katz and Michael Bromwich (a name now familiar to Chicago), although Ms. Blasey Ford offered riveting, often emotional testimony, her version of events left a multitude of questions unanswered, primarily the fact she could not recall the location of the alleged assault, the interior layout of the home in which she claimed the assault took place, and the fact notes kept by Blasey Ford’s therapist detailing the events never mentioned Kavanaugh.  Fortunately, when his turn to refute the charges arrived, Kavanaugh rejected the role of prodigal son appealing for mercy and the nominee came out swinging at his Senate tormentors.  In equally absorbing testimony, Kavanaugh successfully turned the Democrats’ secular inquisition over his character and behavior as a high school student into a scathing imputation of the motives of his accusers for the damage the charges and hearings had inflicted on him, his family, and governing institutions.

Though the ordeal the Democratic Party and its ideological cousin, the Progressives, put Kavanaugh, his family, and the country through in the attempt to derail the judge’s nomination to the High Court did not give birth to the #MeToo movement, it was certainly a high watermark.  It is also a matter over which Ms. Lightfoot should find herself in some trouble.

As the Kavanaugh saga neared its dénouement in late September 2018, Ms. Lightfoot, who had only recently announced her bid for mayor, attended an anti-Kavanaugh rally held at Federal Plaza.  Standing alongside with then-candidates for governor, J.B. Pritzker and Dan Biss, in her remarks, Lightfoot, the former head of the Chicago Police Board, heatedly denounced Kavanaugh.  Although her comments lacked specific evidence to bolster her admonishment of the nominee, Lightfoot and summoned the specter of Anita Hill to excite the small crowd and declared Kavanaugh unfit for a seat on the Supreme Court.  Though Lightfoot’s remarks stopped short of parroting her fellow Democrats’ inflammatory remarks attempting to transform Kavanaugh, a man known for personal rectitude, into an adolescent predator, the implication was clear:  Lightfoot’s words were carefully tailored to allow the crowd’s imagination to run wild and draw the worst conclusions about Kavanaugh.  While Lightfoot’s brief remarks earned a round of applause and a few huzzahs, the problem is Chicago’s mayor has been oddly silent over the recent allegations cast against Joe Biden, the man she has endorsed for president in 2020.

A charge leveled weeks ago, prior to Ms. Lightfoot endorsing Mr. Biden, according to Tara Reade, Biden sexually assaulted her while she served as an aide in his office during his terms in the Senate representing Delaware.  Specifically, Reade claims Biden shoved her against a wall and digitally penetrated her.  Reade claims she pulled away from Biden, to which the former vice president is alleged to have said:  “Come on man, I heard you liked me,” and inquired over Reade’s willingness to “go somewhere else.”  Reade has asserted her complaints to Biden staffers were ignored and following her raising the matter with Biden aides, she was shunned in the office, and had some of her office responsibilities removed.  Moreover, Reade has filed a criminal complaint against Biden with the Washington, D.C. police.  A charge which has many of the lawmakers who attempted to march Judge Kavanaugh off to the gallows running for the lifeboats and print and television media looking the other way, Mayor Lightfoot cannot escape her glowing endorsement of the former vice president.

On March 6, while surrounded by Illinois’ benighted senior senator, Dick Durbin, Representatives Mike Quigley, Robin Kelly, Danny Davis, Brad Schneider, Bill Foster, and Jill Biden at the Union League Club, Lightfoot gushed over Biden.  With champagne and candlelight in her eyes, Lightfoot endorsed the presumptive Democratic nominee then coasted into the stale Left-wing, populist rhetoric about Biden sharing Chicago’s vision to re-build the middle class, expanding access to health care, unifying America, and eradicating poverty.  Though Lightfoot had criticized Biden for his role in the 1991 Anita Hill-Clarence Thomas hearings one year ago, demanding Biden atone for his “treatment” of Ms. Hill thirty years prior, Lightfoot carefully avoided the controversy involving Ms. Reade’s allegations against Mr. Biden.  Although Ms. Lightfoot would prefer to see Reade’s allegation against Biden washed away with a tide, it may be beneficial to compare the allegations leveled against both Kavanaugh and Biden.  While some similarities between Blasey Ford’s and Reade’s charges exist, two contrasts are significant:  Biden has faced multiple, credible accusations and has been recently exposed to have a rich history of causing unease among women with whom he has come into contact.  Judge Kavanaugh did not.

Vital facts Ms. Lightfoot ignored, although compelling evidence has shown Mr. Biden has a peculiar habit of drawing near women in rather creepy ways, do not expect the machisma mayor to revoke her endorsement of the former vice president.  For those befuddled as to why Lightfoot is unlikely to walk back her support for Biden, the standard answer, which is correct but not quite complete, is found largely in politics.  In Ms. Lightfoot’s worldview, a withdrawal of support for Biden is a rather harsh price to pay for the bumbling septuagenarian, who has explained his physical expression as attempts at human bonding.  To Lightfoot, as well as many Americans on the Left side of the political divide, the reality of Biden-the-creep simply does not matter.  To Ms. Lightfoot, the creep narrative is forged by wild imaginations in an election year and is to be subsumed by Biden’s ideological positions, Biden-the-social-justice-warrior, Biden-the-defender-of-women, or simply Biden-the-former-vice-president-to-the world’s-most-famous-ex-community-organizer.  Instead of being distracted by accusations leveled by a former staffer and several other women, Lightfoot would prefer to celebrate Biden the hero, whose self-proclaimed compassion should eclipse the nettlesome complaints of a former office aide.

Far from the heterodox candidate she campaigned as, Lori Lightfoot’s endorsement of Joe Biden reveals the mayor as viewing politics as a zero-sum game.  When an ideological opponent such as Kavanaugh is vulnerable, join in on the gang tackle and drown them in accusation and innuendo.  When the accuser melts back into the comforting shadows of anonymity, the accused maintains the stain on his character for the remainder of his life.  For Mr. Biden, however, Lightfoot will toss him a life preserver and pretend nothing happened.