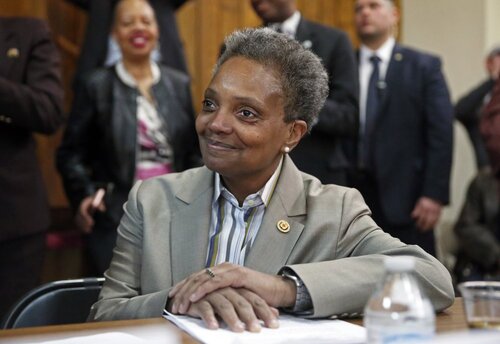 A little more than six months ago, Mayor Lori Lightfoot entered office to great fanfare surrounding her election as the first Black woman elected mayor of Chicago.  Swept into office in a year in which most Chicago voters seemed to be telling civic leaders they were deeply skeptical of the establishment and were demanding reform, with Teutonic toughness Lightfoot campaigned on a reform platform and vowed to turn a page in history.

In her inaugural speech, Lightfoot spoke elliptically of the four stars adorning Chicago’s standard, carefully mentioning the relevance of each emblem symbolizing turning points in Chicago’s history:  The forming of Fort Dearborn, the hosting of the World's Columbian Exposition in 1893 and the Century of Progress International Exposition in 1933, and the Windy City rising from the ashes of the Great Chicago Fire.  However, for the sake of weaving a better yarn in her inaugural speech, Ms. Lightfoot mangled history to suit current politics by re-defining the four revered icons to stand for safety, stability, education, and integrity.  A habit of Progressive officeholders, while the erasure of history to reflect fashionable political purposes may be temporarily comforting, the gesture tends to be accompanied with unintended consequences shallow leaders are unable to predict.

While Ms. Lightfoot’s affection for Chicago is not questioned, when the machisma mayor re-conceived the fourth star on the city banner as “integrity,” she did so with withering sarcasm directed at members of the Chicago City Council in attendance.  In a sharp warning to members of Chicago’s Politburo seated in the audience, Lightfoot informed aldermen they must forsake the archaic traditions of Chicago politics to fulfill the city’s social contract with residents.  While there was once a time in the Windy City in which the mere mention of reform was immediately dashed against the rocks of Chicago politics, Ms. Lightfoot’s assurance she is the balm to heal Chicago’s scarred political landscape hinted at her willingness to cajole or coerce reform if necessary.  Hours after assuming office, in a powerful move indicating her intent to deliver on campaign promises, Lightfoot signed an executive order curtailing aldermanic prerogative.

However, while some were jazzed by Lightfoot’s overarching inaugural message a secular reformation for Chicago politics was on the horizon, with gobsmacking hypocrisy, Lightfoot hired former 45th Ward alderman John Arena to a plum position with the Department of Planning and Development in September.  A hire which cost the city $129,000, amid the earsplitting criticism which followed Arena’s hire, Lightfoot defended the appointment by proudly declaring Arena is a “smart, able person” who would “aid” the new commissioner of planning.  A curious and contradictory move, while Arena’s hire was met with more than meager bleats of protest, it certainly suggested some of the glow enveloping Lightfoot’s pledge to reform had vanished.

Months later, as Lightfoot faced the ordeal of negotiating the city out of a massive $830-million budget deficit, in a moment in which all the deceptions were stripped away and the familiar tableau of the status quo re-emerged, Ms. Lightfoot imparted a $25,000 gift to each alderman for expenses in the 2020 budget.  Taxpayer money which increased City Council members’ annual expense accounts from $97,000 to $122,000, Lightfoot’s bounty to aldermen was not merely business as usual, but the mayor outright abandoning her principles.

A contradiction of her campaign ethos beyond parody, instead of taming the rebellious nature of pampered aldermen and demanding members of Chicago’s Politburo become more economical, rely on unpaid volunteers to perform campaign work or avail themselves of campaign funds or personal income to meet expenses, Ms. Lightfoot’s excessive gift only legitimizes the actions of some aldermen who have for decades used expense accounts to hire family or supporters or have otherwise misused public funds for personal benefit.  Though the $25,000 increase to aldermanic expenses does not enable City Council members to live the life of a pharaoh, it is a bonanza to aldermen, many of whom already consider themselves manifestations of divine beings.  An act which emboldens elected officials to enjoy perks on taxpayers’ backs, by turning over $25,000 to alderman in a chamber crowded with members of questionable ethics, Ms. Lightfoot squandered a rare public opportunity to reform and better an institution over which she has some executive authority and had vowed to rehabilitate.

A gesture which does not merely speak but shouts hypocrisy, from this moment forward, every instance of aldermen abusing expenses can be laid at Ms. Lightfoot’s feet.