Nothing New in Kim Foxx’s Opinion Piece on Chicago Homicides 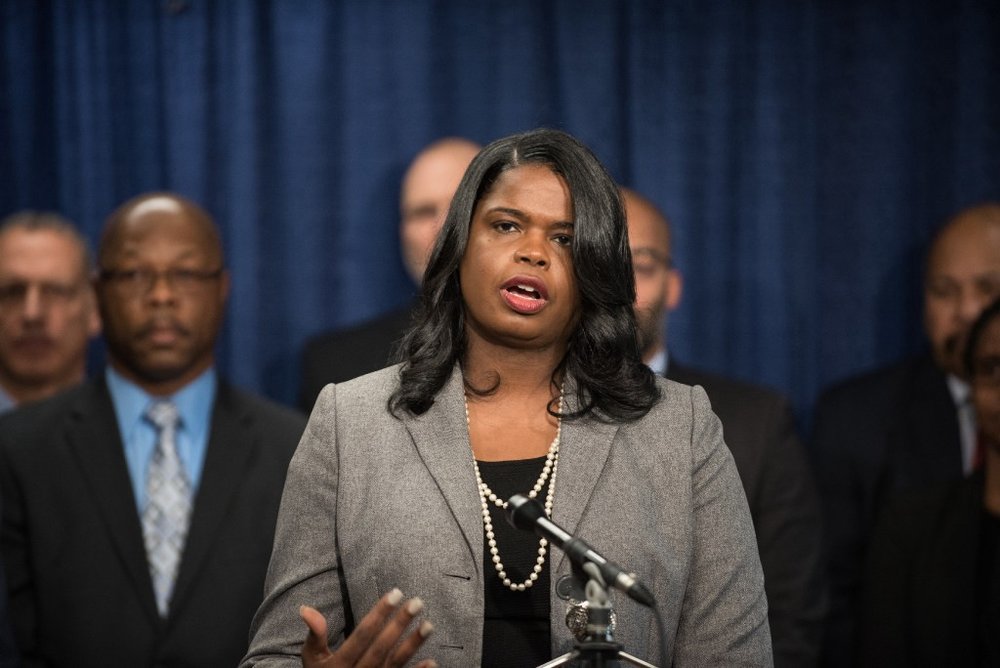 When it comes to cheap stunts or cynical ploys, few can outstrip Cook County State’s Attorney Kim Foxx. Having spent the last two months wrapped in the bosom of Chicago’s fawning media, Ms. Foxx has discovered there are hardships to fame: One must eventually return to work.

In the attempt to build on momentum stirred by her worshipful media patrons celebrating the milestone of her two years in office, Ms. Foxx launched a charm offensive of her own with an opinion piece on January 9. Unsurprisingly, Foxx’s interior brainstorming is played out in the editorial page of the Chicago Sun Times. A commentary which could double for a primal scream for help, in her inelegantly-scripted opinion written alongside Arne Duncan, Foxx calls for a “coordinated plan on all levels of government” to address the plague of urban gun violence. In it, however, Foxx at no time lays out specifics of a plan. In lieu of a plan resembling a strategy to frustrate crime, Foxx favors the application of her beloved jargon, holistic, to convince readers of the sanity of her words and performance in office.

Opening her opinion by describing an everyman glancing at newspaper headlines which yield a series of horrific crimes suffered by residents of Chicago, Foxx shifts with muzzle velocity to declare New York City’s and Los Angeles’ homicide rates have plummeted due to both cities adopting “coordinated, holistic, and publicly-funded plans” to reduce gun violence. For good measure, Foxx embeds crime statistics from both cities to tout her “holistic” methods as Cook County prosecutor. However, Foxx declines to elaborate on specific conditions which drove New York and Los Angeles crime rates down. Lumbering on, Foxx returns to Chicago and bemoans what she describes as a historically-failed response to crime, the reflexive step of strengthening a police presence in communities besieged with violence in the aftermath of a weekend spike in homicides. Oddly enough, Foxx avoided the temptation of taking a swipe at police, stating rather apathetically police are one “tool” in blunting crime, but only one weapon in an anti-crime arsenal. Moving to embrace Police Superintendent Eddie Johnson words of support, Foxx mourns residents’ and lawmakers’ routine of ignoring her wisdom to push for outreach to those most vulnerable to being swept up in the vibrant, clandestine market for guns and drugs overwhelming Chicago’s streets.

To bring to a halt the crime overpowering Chicago, Foxx’s marvelous formula is an “investment” from four levels of government, city, county, state and federal, to provide “coordinated, comprehensive public health and safety resources” in the 15 most imperiled neighborhoods in Chicago. A byword for tax dollars, the “investment” for which Foxx is petitioning to cure the Windy City of its ills is the prosaic demand government pour vast sums of revenue into a jobs program. Foxx’s impulse to re-make Chicago and dramatically drive down homicides comes at a cost of $150 million.

Nearing the end of her despairing message, Foxx succumbs to a bit of self-flattery, mentions homicides dropped in 2018 after an increase from 2016 and announces the ambitious goal under her novel plan is reducing homicides by 30 percent for the coming year. Foxx concludes readers’ agony by exhorting residents to contact lawmakers to demand action on her new public aid program as proper, righteous and good for the city.

Some people lead and some follow, but this opinion piece reveals Ms. Foxx stumbling and groping in the darkness.

If awards were conferred for foolishness, Ms. Foxx’s essay would retire the trophy. An expert par excellence in the trafficking of bromides, this opinion piece symbolizes Foxx’s tenure in office: Empty of ideas.

An opinion which paints a portrait of a confused, directionless state’s attorney, Foxx turns to her favored propaganda engine, the Sun Times, to issue a clarion call for tax dollars to fund another government anti-poverty program. Similarly, Foxx is also seizing on increased Democratic majorities in Springfield by surreptitiously pressuring residents to re-ignite the flame under lawmakers to revive stalled gun-control measures in the Illinois General Assembly. The gaping hole in Foxx’s plan, however, is it does not marshal an evidentiary argument for a costly new program or further laws restricting the use of firearms. Instead of presenting Chicago with a specific, planned series of steps she intends to take to tackle gun crime, Foxx, in her naturally sloppy way, refers to New York and Los Angeles as a guide to follow, but neither offers empirical evidence either city experienced drops in crime as a result of the “holistic” policies the cities share nor articulates details of either city’s plan. Fortunately for readers, Foxx avoids segueing into the all-too-familiar diatribe about the free flow of guns on Chicago’s streets, preferring to weave her demand residents act on her behalf with the written grace and subtlety of a shotgun blast.

An opinion piece intended to pose the state’s attorney as the avatar of the common good, Ms. Foxx’s decision to pen an essay devoid of any details over her proposal for additional federal aid and more gun-control laws illustrates she has no knack for leadership whatsoever. Elected in 2016 vowing to bring a new approach to the prosecution of crime, Foxx’s words on January 9 insisting on government aid and the strengthening of gun-control laws confirm she has nothing new to offer, has abandoned using the law as an instrument to hinder crime, and her desire to consign the Chicago Police Department to the outer edge in the fight against crime. Rather than placing trust in and invigorating police to remove those who deliberately involve themselves in criminal behavior from the streets or diligently applying appropriate charges against those who run afoul of the law, Foxx is placing unshakable faith in the presumed genius of government assistance programs and coordinating her anti-gun messaging with the Chicago City Council, and the offices of House Speaker Mike Madigan and Attorney General Kwame Raoul.

Deep in her marrow, Foxx believes established criminal code is a cudgel which has been historically misused against the disfavored. In Ms. Foxx’s provincial world, only through the mixture of more government intervention and her office proceeding with a soft stance against the accused can lawbreakers’ hearts be renewed and enlarged and miraculously transformed into model citizens. Unfortunately for Chicago residents, what Ms. Foxx fails to recognize is no assurance of employment, free health care or free counseling will induce criminals away from nefarious acts. Moreover, Foxx has also neglected to grasp the pandering to career criminals achieves nothing; they give no ground.

The irony here, of course, is Foxx’s opinion piece appears at the same moment in which two incidents expose her feckless and amateurish leadership in office. In the early morning hours of January 8, a 25-year-old woman successfully defended herself from a would-be attacker with a firearm, fatally wounding the man while she stood on a street corner in Chicago’s Fernwood neighborhood. Foxx’s call for further gun-control measures ignores the fact a firearm is not an instrument of pure, criminal utility, and Chicago residents have resolved to continue to take law into their own hands in view of the fact Foxx refuses to apply criminal charges judiciously.

In a second disturbing instance, Foxx’s office is wavering over determining charges in the death of two-year-old Kyrian Knox. A crime allegedly committed in September 2015, the accused, Kamel Harris, is believed to have murdered the child and disposed of the dismembered remains in Garfield Park Lagoon. An offense so grisly police officers responding to the site of the crime were said to have sought out departmental counseling after witnessing the macabre scene, family members of the murdered toddler remain outraged with Foxx over her office offering Harris a plea deal reducing charges. Foxx’s office has coldly refused to comment on the matter to media.

With a head full of steam and a mouth full of words, Ms. Foxx scribbled an opinion piece so mechanical, so evasive, and so tonally grating it’s almost amusing. While readers expected Cook County’s top prosecutor to submit a reasoned essay with verifiable facts and an outline to aggressively confront crime, what Foxx tendered was the fevered pronouncement both New York and Los Angeles are ahead of Chicago on crime, the pickpocketing of unverifiable anti-crime concepts from both cities, and a wish list which clamors for gun-control laws and a bag of government goodies containing, inter alia, free therapy sessions.

Neither a leader nor path breaker, instead of demonstrating agile and prudent leadership in her opinion, Foxx turned out an emotional plea for further government action. For Chicago residents to survive her remaining two years in office, Ms. Foxx is best served to overcome her illusions with respect to the causes of crime, accept the reality some souls are irredeemable, and understand there are limits to government assistance. Moreover, Foxx could become an authentic thought leader and serve Chicago residents by discarding her anti-police hymnal and supporting the Chicago Police Department in public square. Although Foxx is unlikely to grasp these rudimentary verities, Chicago residents are indeed maturing to her term in office and have come to acknowledge her early critics’ worst fears: Foxx was an unqualified and poisonous candidate for office; she entered office not with an anti-crime strategy but an anti-police agenda; and and she has been overmatched by events since assuming the role of county prosecutor. Residents are concerned with the rash of vacated convictions and have discovered the definition of Foxx’s precious “holistic” policy involves only the extension of sympathy to violent criminals. While gun crime remains a problem from Hell for the Windy City, Chicago residents understand the city’s crime problem will only be solved when the Cook County prosecutor’s office is occupied by a leader who values the lives and property of citizens as do Chicago’s residents.

A woman of staggering incompetence, Ms. Foxx promised readers an enlightened strategy in the fight against crime, but what readers witnessed was Ms. Foxx beclowning herself again.