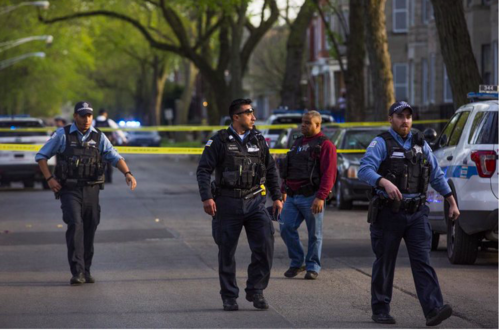 In another beautiful example of miserable journalism dominating the Web, an article published on Reason.com unflinchingly describes Chicago police officers as bumbling fools routinely subjecting Chicago residents in low-income communities to intense repression during the course of executing search warrants. Filed under “police abuse” and titled “Chicago Police Executed More Than 11,000 Search Warrants in Mostly Poor Neighborhoods Over 5-Year Period,” writer C.J. Ciaramella’s deeply-misleading article seeks to recycle the timeworn sketch of racist policing peddled by anti-police groups in Chicago for decades, but only succeeds in pouring fuel on the flames of anti-police derangement.

Opening his howler with the scare statistic Chicago police executed over 11,000 search warrants between January 2012 and December 2017, Ciaramella’s account of the “facts” begins by citing data culled from a Freedom of Information Act (FOIA) of Chicago Police Department (CPD) records filed by Chicago-based Lucy Parson Labs. Equipped with an astral view of Lucy Parsons’ figures, Ciaramella quotes the transparency group’s overwrought director, Freddie Martinez, who draws a comparison to police executing search warrants to Lucy Parsons’ past study of data involving stop-and-frisk and asset-forfeiture in Chicago. Unsurprisingly, Martinez deduces for readers the analysis of stop-and-frisk, asset-forfeiture, and search-warrant data form an eerily-familiar pattern to suggest police practices as predatory in minority neighborhoods.

In order to hype up the matter of police search warrants to hysterical proportion, Ciaramella then notifies readers Lucy Parsons’ revelations follow the announcement of a probe to look into how police “vet and execute” search warrants by Chicago Inspector General Joe Ferguson. Ciaramella then swiftly imparts to readers the fact Ferguson’s inquiry was inspired by a year-long investigation conducted by local CBS television affiliate, WBBM. A story pursued by the indefatigable Dave Savini, the network’s overblown reporting had dutifully reported police were routinely “busting into the wrong houses and terrorizing innocent families.”

Maximizing on Lucy Parsons’ interpretation of CPD data, WBBM’s reporting, and Ferguson’s new investigation, Ciaramella writes with undisguised pleasure as if Chicago police are a revival of the Gestapo:

“Sloppy, unverified search warrants led heavily armed Chicago police and SWAT officers to ransack houses; hold families, including children, at gunpoint; and handcuff an eight-year-old child in one case, CBS 2 found. In another case, 17 Chicago police officers burst into a family’s house with their guns drawn during a 4-year-old’s birthday party.”

Plunging further with reckless haste, Ciaramella demonstrates a keen interest with the perspective from Chicago attorney, Al Hofeld Jr. A top-flight silk with six lawsuits against Chicago to his name, Hofeld poses as the defender of the poor and downtrodden by branding search warrants as “raids,” and characterizes police carrying out court-ordered mandates as a “silent epidemic inflicted on a mass scale on kids in Chicago.” Ciaramella then trumpets Hofeld’s latest client, a litigant who insists they were unfamiliar with the person sought by police during the execution of warrants on the family home.

Ciaramella then introduces newshawk Matt Chapman, who decries the higher percentage of search warrants executed on Chicago’s South and West Side.

“The distribution is all in the South and West Side, whereas in the North Side most of the points didn’t even get filled in. Barely any search warrants happen on North Side. It’s very clear that this is lopsided,” Chapman moaned.

This is journalism in the age of hatred for police.

Before we expose the glaring mistakes in Ciaramella’s piece, it is essential to acknowledge up front police do commit error. During the course of policing of any kind, fault on the part of police must be considered. Although the margin of error is slim, police miscalculation can frustrate the public, fluster the department, and should periodically merit low-level disciplinary action taken against an officer. With this fact in mind, however, it is also imperative to note police error is infrequent and should be defined as such: Police misjudgment. Furthermore, it is also mandatory in any honest conversation over policing to recognize the instance of police error either injuring or claiming the life of an innocent is extraordinarily rare. Nonetheless, the demonstrable fact of honest police error is a rudimentary verity over policing Ciaramella fails entirely to take into account in his article on Reason.

Despite Ciaramella’s blundering over allowing for honest police error, his article is riddled with fault elsewhere. Flaws which demonstrate Ciaramella neglected to perform journalism’s basics, mainly research, among the most notable mistake Reason.com’s hotshot reporter commits is his insistence SWAT teams are heavily involved with the execution of search warrants in Chicago. An utter falsehood revealing Ciaramella failing at familiarizing himself with police procedure, a vast majority of search warrants are carried out not by SWAT as he contends, but rather by CPD’s Bureau of Organized Crime, Drug or Gang Enforcement units, or to a lesser extent, Bureau of Patrol.

Illustrating only a partial command over facts and no command over reality whatsoever, Ciaramella’s piece hits the skids when he cites several instances in which police were reported to have pointed weapons at children, handcuffed residents, and disrupted a birthday celebration. While the narrative appears unsettling and tugs at readers’ heartstrings, Ciaramella’s article portraying Chicago police as an immoral monster dismisses the hard and unlovely truth children under the age of ten are known to be conscripted into the service of the drug trade, pre-teens regularly fulfill various roles to facilitate the lively covert market for illegal guns, the movement of stolen goods or other criminal activity in high-crime neighborhoods, and many homeowners in high-crime neighborhoods, as a rule, provide alibis or outright lie to police to protect criminal acquaintances. Similarly, Ciaramella appears resistant to write over the fact drug dealers and gang members are notorious for using wives, girlfriends, and children, including infants, as human shields, thereby requiring the safety measure of inhabitants in a household to be detained and handcuffed by police.

Nevertheless, what is truly dismaying with Ciaramella’s piece on the CPD’s execution of search warrants is the fact he ignores entirely the plain truth these actions are perfectly legal, are approved by a court, and occur in communities in which crime flourishes. While Ciaramella’s article endlessly bemoans alleged police error, he similarly throughout his essay slyly alleges police racism by nonchalantly referring to heightened police activity in Chicago’s West and South sides, neighborhoods known for higher concentrations of minority residents.

Bearing in mind Ciaramella declined to perform even cursory fact-finding and relied almost wholly on vague statements and statistics decoded by Lucy Parsons, it is essential to provide a frame of reference so readers may make an informed judgment. For those willing to see reality, a citywide image of crime patterns furnished by heyjackass.com in comparison to an image provided by Matt Chapman representing neighborhoods in which police executed search warrants are virtually identical. A similarity so striking, it utterly demolishes Lucy Parsons’, Ciaramella’s, and Chapman’s contention police are motivated largely, if not entirely, by demographics.

While it is a painful truth a higher percentage of violent crime occurs in minority neighborhoods, Ciaramella never confesses high-crime communities require a higher degree of police attention and the actions taken by police are singularly determined to thwart criminal activity. Additionally, while focusing on alleged police error only, Ciaramella neither mentions how thousands of separate search warrants succeeded in netting wanted criminals and the seizure of illegal drugs and guns, nor does he applaud police for those successful assignments reflecting good judgment on the part of police who were involved.

It is all too easy to craft deceptive stories.

A new tactic in journalism’s war on police, unlike most other reporters who prefer a sustained, direct attack on police, Ciaramella chose a flanking movement by assailing a proven method of proactive policing. While nothing in Ciaramella’s piece is outright fabrication, his failure to properly contextualize police behavior irresponsibly confers legitimacy to his favored notion the CPD resembles racist shock troops disrupting the jolly good fun of blissful residents. All the more heartbreaking is the fact Ciaramella appears more preoccupied with scrutinizing the behavior of police or accentuating the rare occasion of police error over emphasizing the murderous violence and flow of both guns and drugs which necessitates the CPD’s policing in such neighborhoods. And to concentrate on alleged police persecution of minorities is to deflect attention from the violent crime occurring in communities in which the absence of law and order is already agonizing.

If we have learned anything from Ciaramella’s article it is the fact police have few friends among journalists; journalism is often used as a weapon against police; and journalists who fail to perform diligent research traffic in propaganda disguised as journalism.

Should Mr. Ciaramella seek a position with a newspaper, he may want to consider a move to Chicago. After producing an article as awful and inaccurate as this, Ciaramella would receive an overly cordial reception at the Chicago Tribune or Sun Times.