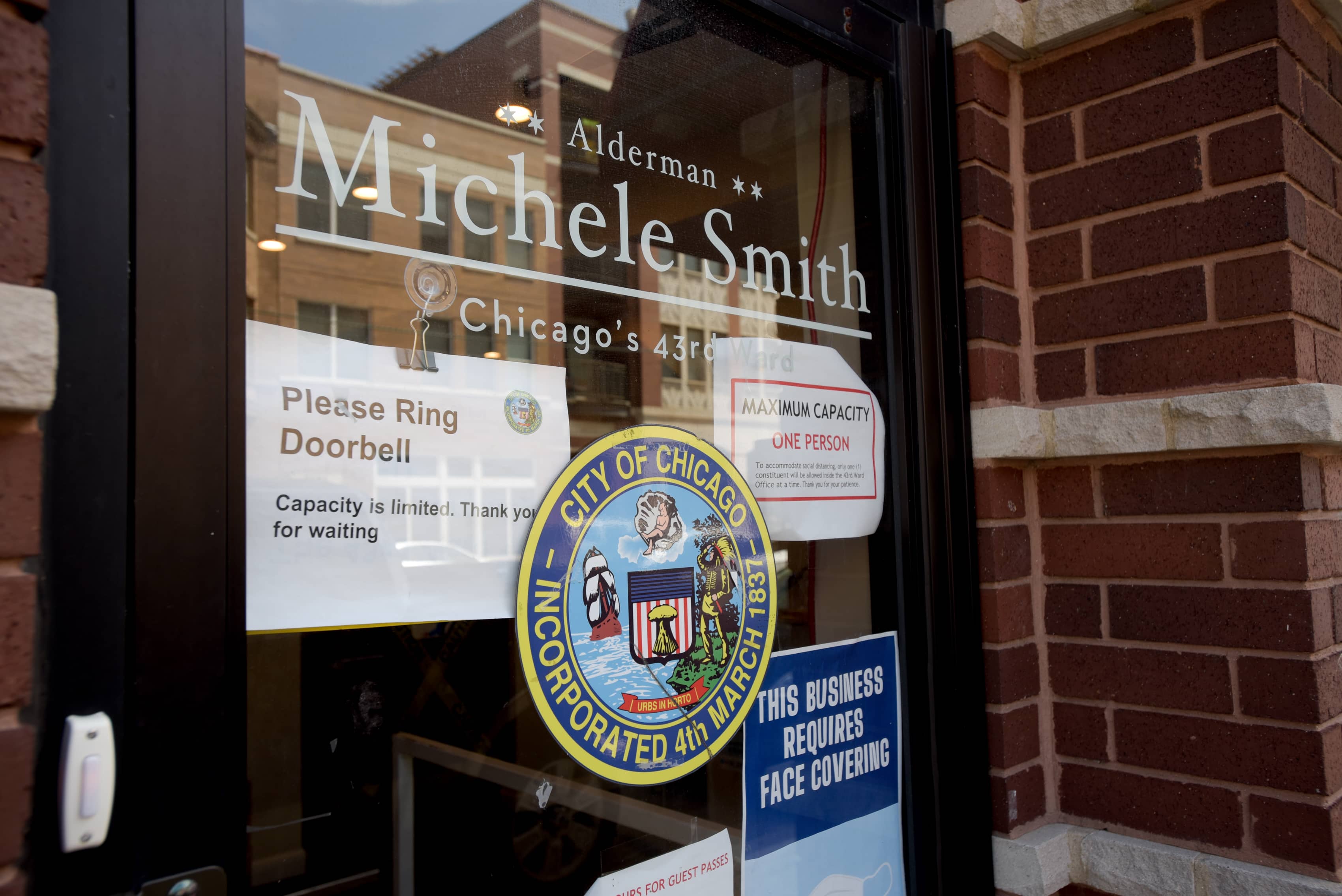 Another outrageous violent crime in which a Lincoln Park couple was robbed at gunpoint while walking down the street generated the usual outrage from Alderwoman Michele Smith (43).

The offenders allegedly pulled up in a car and confronted the couple at the 1800 block of North Dayton, taking the woman’s purse and the husband’s wallet and phone before pistol whipping the woman and leaving her with a head injury, according to media outlet CWB Chicago.

The incident follows a series of similar crimes, all using guns, in the ward Smith represents reported by CWB, including the robbery of three women near DePaul University, as well as that of a 45-year-old man at the 2200 block of North Clark.

In response to the robbery and pistol whipping of a couple on Dayton Street, Ald. Michelle Smith sent an e-mail to her constituents:

“We are outraged at the recent spate of crime in our community over the past few days. This level of crime is unacceptable to me, and I know it is to all of you,” she wrote.

Who is this alderwoman kidding? Under the woeful leadership Ms. Smith has provided the city, particularly as a member of the City Council’s Committee on Public Safety, Smith and many of her fellow aldermen on the panel might very well have printed up flyers and passed them around to young gang members inviting them to form small cells of roaming bandits, carjackers, and even killers. The sum total of the alderwomen's actions the last several years have been to handcuff the police, largely through policies based on lies, encourage violent crime, and refuse to hold accountable other elected officials who seem to have made encouraging violent chaos the centerpiece of their political careers.

Committee on Public Safety members Anthony Napolitano (41), Nicholas Sposato (38) and Raymond Lopez (15) are shining exceptions to the otherwise appalling capitulation of the public safety panel when it comes to the safety of the general public.

The failure of Smith and numerous other aldermen seated on the Committee on Public Safety is a central reason why Chicago has degenerated into violent chaos. It is time for these aldermen to finally admit that allegiance to progressive ideology and public safety are wholly incompatible, as the chaos Chicago is experiencing mirrors other cities also struggling under the absolutism and incompetence of progressive rule.

Let’s consider the full magnitude of Smith’s and her progressive brethren’s failures.

No police department can address violent crime in Chicago with a prosecutor like Kim Foxx, who has transformed her office into an advocacy shop for violent criminals and a weapon to mark police officers. From the Smollett case to a stack of exonerations of convicted killers that even the highest Cook County state prosecutors found questionable, Foxx has used her office to reward political allies and attack their enemies.

Low or no bail, eliminating retail theft statutes, refusing to charge offenders appropriately and the relentless vilifying of police, Foxx openly states she sees her office as an instrument for reform and activism, not the prosecution of crime. It doesn’t take long for word to get out among the criminal class that Cook County is on their side. This is a primary reason groups of criminals are running wild through Chicago’s streets.

In other cities that have seen the prosecutor’s office taken over by progressive ideologues in the same mold as Foxx, politicians have spoken out and taken action against the nightmarish crime unfolding in their cities. The former mayor of Philadelphia, for example, lashed out at prosecutor Larry Krasner, a dogmatic progressive who, like Foxx, was financially supported by leftist billionaire George Soros.

“Krasner should also use his words to send a message to the shooters, murderers, and criminals of this city by committing to actually prosecute them, rather than coddle them, make excuses, reduce or drop charges. He should commit to locking them up for carrying illegal weapons or shooting people,” former Philadelphia mayor Michael Nutter said of progressive prosecutor Larry Krasner in a recent editorial.

Where are such statements about Foxx from Ald. Smith as her ward crumbles into a wasteland of shootings, carjackings, retail thefts and batteries, often carried out by offenders released under the leadership of Foxx?

Refusing to hold Foxx accountable stands in stark contrast to Smith’s willingness to shout police accountability slogans so many aldermen use to portray themselves as actually doing some real work protecting the public. Here Smith shines. Smith joined a chorus line of other City Council members in 2020 celebrating an agreement allowing complaints against police officers to move forward without a signed affidavit. A long-coveted goal of the anti-police movement, the tunes to which Smith and her cronies dance now permits any of the carjackers, thieves, murderers, or armed robbers plying their trade in Chicago to file any complaint against police without any fear of repercussion for lying in their complaint.

This means that hardworking police officers, the men and women responsible for arresting the criminals who pistol whip victims as they steal their cars and valuables, will rack up the most complaints. The complaint will then be cited by the city’s kowtowing anti-police media and give media the opportunity to vilify the very officers who are trying to remove criminals from the streets and maintain order. Eliminating the affidavit requirement is the Catch-22 the anti-police movement wants to impose upon the police, a trap Smith seems only too willing to set for cops.

Speaking of the media, Smith, like so many other progressive comrades selling out the city on a daily basis, has established a clear pattern of bowing to the most corrupt media machine in the country rather than stand for policies that will reduce crime. One example is the failure of Smith and many of her colleagues in the City Council to address the mass of evidence of dubious exonerations based on claims of police misconduct. The questionable claims have cost the city hundreds of millions of dollars in settlements and have transformed criminals into folk heroes.

Another example of Smith’s incessant media kowtowing is the faux outrage of an errant warrant served on the wrong home in which the police burst in on a naked woman.

After securing the scene, the officers covered the woman and repeatedly apologized. Despite the fact that the warrant was signed by a judge and the informant had given police the wrong address, Smith and the City Council bowed to the media-manufactured narrative of police misconduct. An account generated by CBS Chicago’s star newsreader, Dave Savini, a frothing anti-police reporter whose bias is a source of contempt among police and prosecutors, new policies regarding the execution of search were put into place. The new rules made serving search warrants far more difficult. For making an honest mistake, officers involved with the search warrant on Anjanette Young’s home were threatened with severe discipline, including termination, merely for getting an address wrong.

The warrant case is hardly unique. Smith and many Chicago aldermen have stood by while Chicago adopted ludicrous restrictions to foot chase policy, pages and pages long dictating endless requirements when an officer can chase an offender. The new restrictions to the foot-chase policy arose in response to a fatal police shooting in which an adult offender handed a gun to a minor who attempted flight after officers arrived on the scene. Though armed as he fled, the offender did not drop his weapon in plain view of the officer. Turning on the pursuing officer while appearing to surrender, the officer fatally shot the armed youth.

Could one reason for the explosion in retail thefts around the city be that offenders are now aware the police cannot chase them? Could thieves be emboldened because they know all they have to do is run? And what of police who are compelled to use lethal force? What can they expect from the city agencies assigned with the task of reviewing their cases?

Consider this: A federal judge recently rejected a federal lawsuit against two officers who fatally shot an armed man. The judge declared the officers acted reasonably and ruled the shooting justified. At the same time the judge rejected this lawsuit, the city’s police oversight agency, the Civilian Office of Police Accountability (COPA), reviewed the case and claimed the shooting was not justified. COPA investigators recommended the officers be fired. Now the officers must face the Chicago Police Board.

The disparate rulings, one legitimate and one kangaroo, never generated a response from members the Committee on Public Safety, the panel on which Smith is seated. Although the judge’s ruling was more evidence that COPA is a renegade agency whose decisions fly in the face of basic law, common sense, and use of force policy, Smith and her City Council cronies neither commented on this court ruling in a fatal shooting nor did Smith put forth any effort to reconcile with the conflicting rulings for the sake of two officers who were trying to protect the public. From Smith and her fellow aldermen on the public safety panel, there is no mania for accountability at COPA and the Chicago Police Board, only dissatisfaction for police every time a camera is rolling or a reporter is within earshot.

How wonderful it would be for Smith to pick up the phone and ask the special monitor of the consent decree, Maggie Hickey, and ask Hickey in her quest to impose “constitutional” policing in Chicago why COPA is making rulings rejected by federal judges. Perhaps Smith would ask Hickey to take a longer look at COPA and its rulings, including its history of suspicious media leaks in high profile cases. Perhaps the “special monitor” would apply her constitutional eye to the machinations of COPA, whose investigations and rulings have undermined any confidence among police officers that they will be treated fairly.

Will Smith grill Hickey in defense of police? Don’t bet on it. In addition to their incompetence and deceit, most aldermen in Chicago hold a sense of entitlement bordering on delusions of royalty. This is most pronounced in their assumption that police should endure a gauntlet of traps set against them if they do their job while so many aldermen like Smith coast along by feeding the police to the media and political wolves

The party is over for representatives like Smith. Sporadic, self-righteous proclamations about violent crime from Chicago’s elected leaders are hollow. Chicagoans have had enough.

If Smith and so many members of the Committee on Public Safety truly want to weed out the “root cause” of crime (a favorite phrase of do-nothing elected leaders), they should start by taking a long, hard look in the mirror.