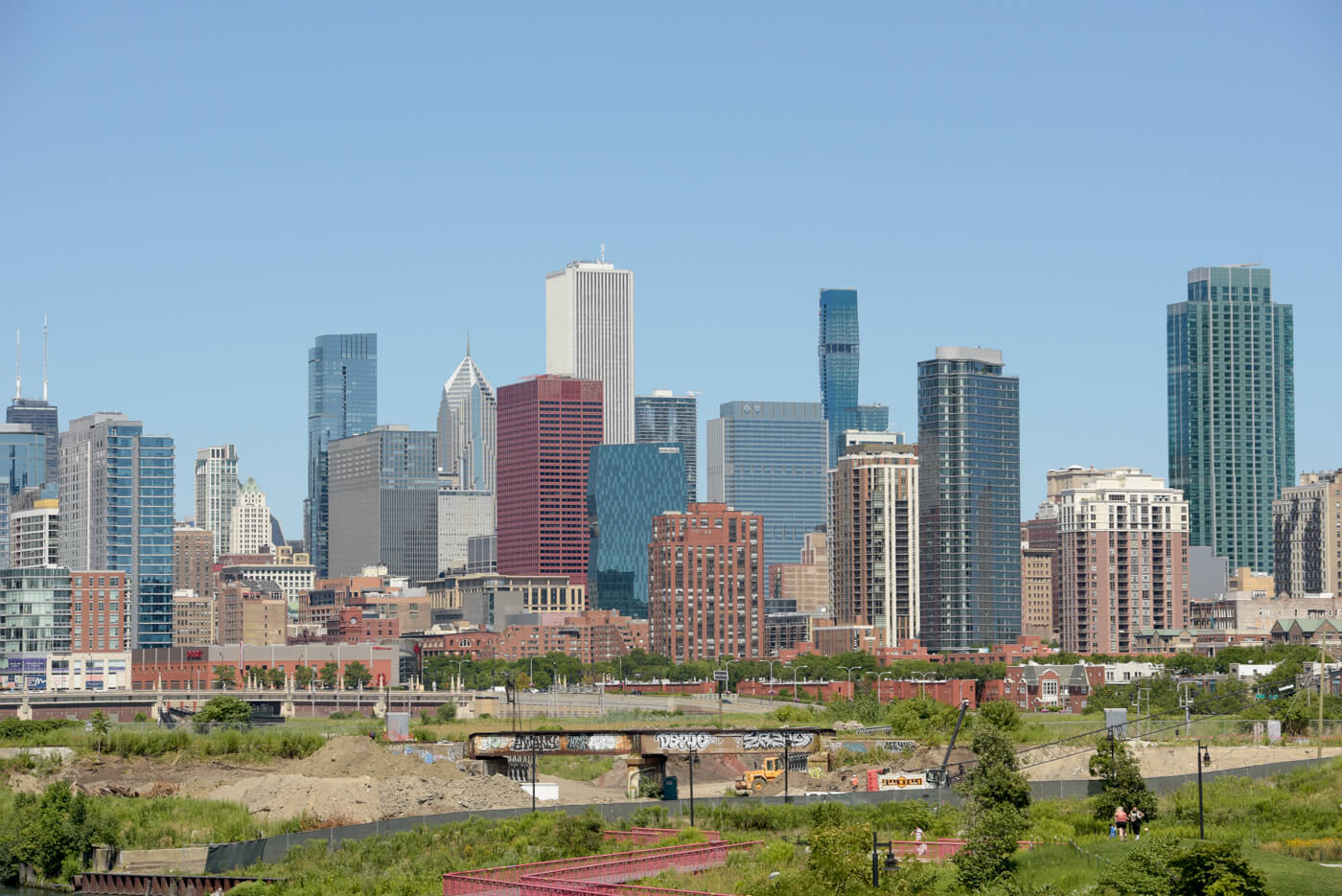 It's time for Chicago to re-think urban planning.

‍After Chicago’s 2020 trauma, an urban health assessment of the entire organism would understand change over time.

The vision of a living, evolving city contrasts with Zoning’s static perception of the 1920s planned city in a garden, before high-speed automobiles enclosed it with suburbs.

A healthy Chicago would nourish all parts of the body in different ways, with tailored treatments to keep each organ, each community, productively contributing.

Chicagoland comprehensively would nurture coordinated connectivity through digital, social, and travel services, combined with natural pathways between many polycentric places.‍

Years of stress on Chicago's health flared up in 2020. Our metaphoric bones represented by the high-rises of the Loop have lost a sense of purpose. The flow to our nutritional lakefront was blocked. Furthermore, many factors atrophied the muscles of economic well-being in our communities, city-wide, fraying tendons no longer connected to the Magnificent Mile.

There are many stories about people moving to the suburbs, or Atlanta, or elsewhere. The lack of vitality is visible in higher out-migration and lower in-migration for Chicago and Illinois. While not an exodus, this steady trend is the sign of an aging body that began many years ago. The pandemic shined that lonely Diner light on the quietness of Chicago’s Central Business District.

Chicago’s life force has been dimming since building O’Hare airport and the tallest skyscraper in 1974. Energetic construction in the 21st-century has not approached these uplifting accomplishments in height or impact. Meanwhile, the world has moved on, and Chicago fell from being the 9th largest city in 1965 to 39th in 2018 (United Nations). What happened to Chicago’s innovative spirit? Chicago’s patron saint of City Planning said: “Make no little plans; they have no magic to stir men's blood.”

An Opening that Excites People to Build Healthy

Repealing the City’s Zoning Ordinance and disbanding the Zoning Ordinance Administration at this stage in Chicago’s evolution is an effective way to restore vibrancy and innovation to Chicago’s health. Today, Chicago has matured into a global city, even if a tad tired. The Loop itself is a spectacular foundation for Chicago’s identity, and our transportation network contains the potential contours of a polycentric metropolis. Insecurity from 2020’s trauma is not a good reason to dwell in the past: Chicago has made many contributions to the global human endeavor; we can do more. The Park District and Lakefront are the envy of cities worldwide.

Opening the way for people and organizations to build for specific community needs, post-pandemic, is just the springboard to energize commercial innovation, invent more humane building types, and find better arrangements for 21st-century neighborhood activities. Chicago’s Zoning Plan was helpful a hundred years ago when the City was young. It provided a guidebook to deal with industrial waste like Bubbly Creek and a massive population surge. Even earlier, when Chicago was an infant, Burnham’s plans and other inventor's ideas were part of a national mission to organize the swamps languishing between the Saint Lawrence Seaway and the Mississippi River into a productive, industrial city.

At each stage in Chicago's development, new methods were essential to its success. Challenges today are no longer those Zoning was designed to address. Instead, Chicago is de-industrializing, and our population is shrinking. Of course, new projects need to be reviewed and adequately engineered – and today, we have updated building codes and sophisticated financial arrangements for that. Unencumbered by centralized zoning, different sized communities across the city would gain the responsibility and specific powers to build to their specialized needs.

Where did a centralized, functional-based form come from?

Chicago’s single-peaked urban form, ossified inside the zoning ordinance and illustrated in the 1920s by sociologist Ernest Burgess, was named the concentric zone model. It described a Central Business District, with rings of other functions slowly dissipating into rural lands.

Today’s Ordinance still pursues what appeared to be an ideal form one hundred years ago. This single-peaked, function-based form contributed to the motivation behind Chicago's iconic Sears Tower office building. Nevertheless, fifty years since, businesses in Oak Brook, Schaumburg, Deerfield, and Naperville have sprouted and generate significant community livelihoods. These interwoven mixed-use centers of activity adjust to the same unpredictable global economic phenomena as Chicago’s Loop.

The Zoning Ordinance’s unwavering vision of urban form has not been helpful in 50 years. A significant admission of its ineffectiveness is the recent allowance of residential uses in the Loop. Tremendous access to transportation modes sustains the Loop, and more recently, Wacker Drive’s desirability. It is the same reason that mixed-function activity nodes expanded around O’Hare airport in the 50 years since it opened.

The end of open-outcry trading pits is another symbolic closure of 20th-century visions of Chicago’s single-peaked, zoned-by-function form. Embarrassingly, Chicago’s Zoning Administrators have incorporated overly complicated crutches, splints, and band-aids in the form of decorative advice from cute small towns. Copycat adoptions of overlay zones claimed as innovations prolong this centralized ideal, eliminating the self-organizing creative energies of communities themselves. Zoning has become a permanent state of exceptions as Planned Unit Developments proliferate. Chicagoland’s economic, political, and social activities have become polycentric, more global, decentralized, and intertwined, regardless of antiquated visions enshrined in a Zoning Ordinance.

The most famous woman who won the Nobel Prize in economics is Elinor Ostrom "for her analysis of economic governance, especially the commons." With today's celebration of women, it is odd that her valuable work remains under-appreciated. With a nudge and a wink, her work may have been shunned by Chicago because it proved the economic effectiveness of polycentric operations, contrary to Chicago’s centralized means of wielding power.

In evolution, there are critical events that precipitate a phase change into growth or decay. Now is the time for Chicago to share power, embrace decentralization with transparency, and create a 21st-century basis for managing the evolution of Chicagoland.

Repealing the Zoning Ordinance will provide sustenance to “moisten the roots of all that has grown.” Thinking about this concept of Whitman’s is particularly apt at this stage in Chicago’s development. The metropolis has a solid foundational form and is no longer the wild west trading post of the 1870s. Eliminating the Zoning Ordinance will create the opportunity to develop an advanced mechanism for managing the evolution of polycentric places. Such an environment would catalyze people and organizations to make a better metropolis.

New perspectives would acknowledge a loose pattern of community sizes: from small groups of hundreds of people, to neighborhoods of thousands, to districts of tens of thousands, to cities of hundreds of thousands. These naturally forming community sizes need common tools for integrating development at each respective scale of their place. Furthermore, the metropolis itself could blossom to more than ten million people in ten years if we implement changes now. We need plans bold enough to stir the blood of our diverse population.

Large-scale projects take many years, and even the existing zoning does not guarantee they will be positive. If repealed zoning turns out to be a bad idea, it could always be restored in five or ten years. Such an improbable scenario would imply that no good ideas emerged from the wealth of innovative thinkers in our nation's real estate industry.

Also under-appreciated is the exclusionary roots of Zoning-by-Function’s implementation. Strangely, Chicago is not leading the way to repeal zoning ordinances, given numerous lawsuits across the country that are targeting the exclusionary effect of zoning’s old-fashioned ideas.

Therefore, we ask Mayor Lightfoot to use her centralized power to repeal Chicago's Zoning Ordinance and begin sharing power with the rest of the metropolis. Unleash people’s and organizations' will to build and try new things, even at the risk of failure. Chicago's iconic monument to failure when trying new things is Navy Pier which persisted despite a lack of purpose. Repealing the Zoning Ordinance will reveal a new kind of Chicago character.

How will the city manage its future? While Houston has no zoning ordinance today, it probably would have been helpful one hundred years ago. Cities are always involved in coordinating even the most prominent developers' efforts, perhaps too involved. Consider if Chicago switched its focus from re-decorating to imagining valuable grand-scale infrastructure, similar to the Lakefront Park’s and O’Hare airport's success. Inventing 21st-century infrastructure is a better use of Chicago’s planning efforts. Global cities evolve when outside events jolt a system far from equilibrium, so, as London evolved, now is Chicago’s time for fundamental change.

Another reason is money:

Healthy communities have healthy economies. Today, many people are reaching for Joe Biden’s wallet and Janet Yellen’s purse-strings. To highlight an opening, one possible way to retain an appropriate amount of influence over significant new projects across the city: use federal funds to gain an equity stake of roughly 30% in notable developments. By allowing developers creative leeway to resolve urban challenges, multiple community leaders would try different building-types suited to their needs.

Other benefits would be that the city would gain a durable decision-making role, yes it would be less authoritarian, yet it would enable continuous adaptation and oversight concerning each community's needs. Moreover, the cities, districts, and neighborhoods can reinvest profits supporting their commons in perpetuity. Zoning’s static methods, intended to benefit the commons, were only effective once at the configuration of a new project. With a 30% ownership, the city would gain partial influence continuously as places evolve.

Disbanding the Zoning Administration would notably reduce operating expenses in a challenging fiscal environment. Imagine the ability to reinvest profits in ten years into additional projects throughout the city. It is a modest way to bootstrap into existence, infrastructure benefitting the commons. Perhaps then, Chicago could build a truly innovative, metropolis-wide, and genuinely desirable travel services infrastructure.