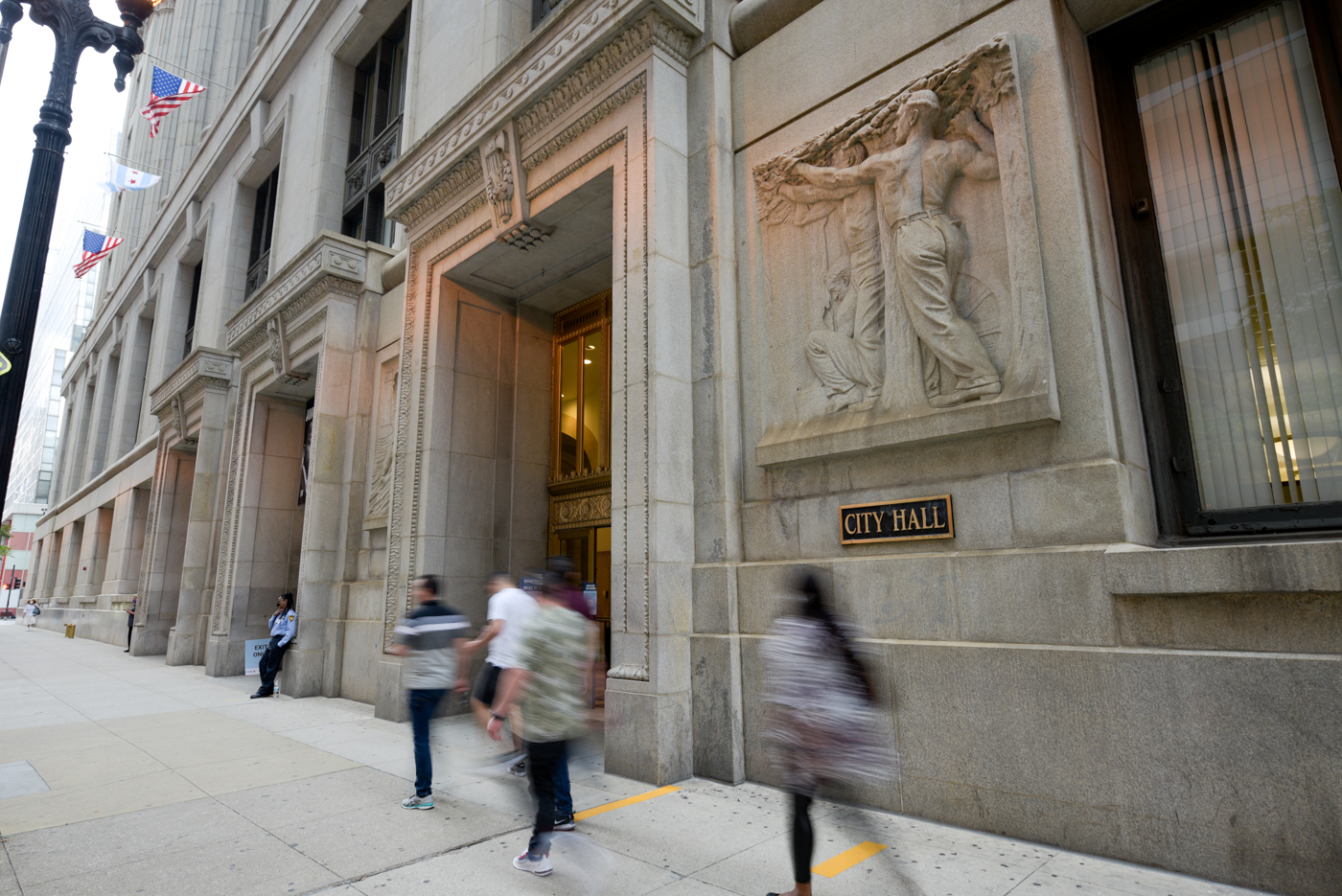 If the Chicago City Council had a Mount Rushmore for sheer stupidity, the likenesses of its six-member Socialist Caucus would certainly feature prominently.

A group of cranks with crackpot ideas, these six ideological extremists include: Daniel La Spata, the delicate flower of the 1st Ward; 20th Ward militant Jeanette Taylor; Byron Sigcho-Lopez, the revolutionary who represents the 25th Ward; the 33rd Ward’s flighty Rossana Rodriguez-Sanchez; 35th Ward blowhard Carlos Ramirez-Rosa; and the 40th Ward’s hip-hop artist-turned-officeholder, Andre Vasquez. The Chicago City Council’s version of “The Squad,” all but one was elected in 2019, and all six have backgrounds in community organizing.

A cult of action, community organizing is best defined as the practice of activists identifying a specific aggrieved population, and inflaming passions over their presumed plight. When a base is roused over the supposably lamentable conditions in which they exist, activist leaders take collective action to apply pressure to local officials to redress their grievances, mainly by insisting the affected group receive money. Though community organizers refer to this as “direct action,” it is extortion. Woefully, their tactics consist primarily of becoming enraged and miserable, shouting banal slogans, and lobbing lughole-shredding abuse at their alleged tormentors. In other words, the Socialist Caucus is a cabal of energetic agitators who have perfected the art of mobilizing and provoking a rabid base.

A cluster of elected lawmakers who yearn for the transformation of capitalistic society to socialism, these deluded thinkers believe in fairness and equality writ large, but similarly presume achieving these conditions cannot be attained without social leveling. A notion predicated on the socialist tenet that society’s most privileged amassed their personal wealth through unjust means, to socially level, laws must be crafted to fulfill the ethical ideas of freedom, justice, equality, democracy, and social solidarity. These laws can include stiff taxes placed on the wealthy to fund public programs and redistribute capital, as the privileged must be stripped of their assets for the sake of hoisting up the oppressed.

A class of aldermen who desire a society based on cooperation rather than on a ruthlessness they claim competition encourages, these lawmakers’ confiscatory demands are not strictly limited to private wealth or private property: Most of the members are known for their generally negative views of capitalism. Likewise, caucus members are widely recognized for calling for government seizure of large sectors of private enterprise and industry. This means, of course, passing legislation granting workers’ representatives equal power in the workplace. It, furthermore, would mean creating regulatory agencies to oversee corporate behavior, and pressing for public ownership and control over essential services, namely health care, education, transportation, and energy. Under this grand design, which would place a sizeable portion of Chicago’s economy in the public sector, what would remain of private enterprise would be suffocated by manifold layers of government and union control.

Though members of the Socialist Caucus often rhapsodize about the wonders of socialism to mitigate the hardships of Chicago residents who have not succeeded under capitalism, they tend to obscure the dark side of socialism: extortionate taxation, human misery, economic inefficiency, cronyism, and corruption.

Despite their constant embrace of unworkable and convoluted socialist policy prescriptions, the members of the Socialist Caucus have outdone themselves with an October 7 City Council resolution demanding the Federal Reserve offer interest-free long-term loans for the next thirty years. A resolution submitted by Alderwoman Rodriguez-Sanchez (33), the measure is cosponsored by the five remaining Socialist Caucus members and three members of the chamber’s Progressive Reform Caucus. Although Ms. Rodriguez-Sanchez may believe she is deserving of fulsome praise for authoring the resolution, one substantial problem exists: Rodriguez-Sanchez’s call for zero-interest loans would exceed the Fed’s mandate.

A demand conceivably inspired by the Fed’s creation of the Municipal Lending Facility (MLF) in April 2020, it is painfully clear Rodriguez-Sanchez is seizing on the pandemic to justify zero-interest rates on loans from the Fed to service the extraordinary debt situation in which Chicago finds itself. This call for the Fed to issue bonds is, irrespective of the pandemic, patently ludicrous.

Historically, the Fed has expanded its responsibilities to meet extraordinary economic dislocation. Under the burdensome fiscal circumstances created by COVID-19, the Fed created the MLF to fulfill the role of “lender of last resort,” which allowed for the purchase of municipal bonds from certain jurisdictions within a market-based framework. The Fed did so to achieve three temporary goals: (a) assist the management of the impact of cash flow pressure to alleviate delays in tax receipts; (b) mitigate the crushing impact of minimal revenue, owing to decreased economic activity; and (c) help borrowers make debt service payments on their obligations. The MLF was never conceived to rescue cities sinking in debt. Although the state of Illinois took advantage of the MLF with a $1.2 billion “tax-anticipation” note, the Fed did not issue bonds to Springfield. In contrast, it merely held state bonds with the expectation of 3.8 percent owed in interest. In sum, the MLF was a temporary measure to palliate the dire pandemic-induced conditions. Furthermore, the Fed does not have the legal authority to do what the Socialist Caucus is demanding, nor should it be saddled with responsibility for debt built by a city which has earned a dismal credit rating.

A preposterous request, Ms. Rodriguez-Sanchez’s resolution calling for the Federal Reserve to issue zero-interest loans to meet Chicago’s financial needs is deeply troubling on several fronts.  First and foremost, it represents the Socialist Caucus’ deep misunderstanding of public policy and the fundamentals of economics. It similarly captures the caucus members’ lack of knowledge of both the role the Fed plays and its limits in the nation’s monetary and financial system. Though the Federal Reserve’s general functions are manifold, the central bank’s obligations are not so overtly or unnecessarily complex they are beyond the understanding of public officials elected and entrusted to cope with basic fiscal policy. Second, and more worrisome, the caucus’ call to issue zero-interest loans demonstrates how its members are deliberately ignoring the truth over what the Fed is capable of accomplishing, in order to appeal to their constituents’ emotions. Unlike an introduced ordinance, the intent of which is to seek a vote, a resolution is not presented for action. In essence, the Socialist Caucus’ resolution is merely a symbolic gesture and thus meaningless.

The Socialist Caucus is a profoundly negative force in Chicago.

The Socialist Caucus’ call for zero-interest loans is a special form of dishonesty. A conscious effort to deceive voters, it is six aldermen gaslighting their supporters into believing they share their concerns and are working to address their needs. Rather than the caucus setting the goal of translating what is proposed into law, the aldermen measure the efficacy of their ideas by how many of their constituents are willing to genuflect before them. Although voters are indeed transactional, and support for lawmakers hinges on delivery, to the Socialist Caucus a demand for zero-interest loans is disingenuously daring.

To cook up such falsehoods to build support is how the socialists roll. The call for zero-interest loans is not a serious attempt to solve Chicago’s intractable fiscal woes. On the contrary, it is an empty expression of their zeal, an acknowledgment of their righteousness and the purported urgency of the cause they seek to confront. To the Socialist Caucus, their views are just; they are practical, and they are driven by reason and truth. Most importantly, they consider themselves morally superior to others.

To critics who throw up obstacles to their proposals, the caucus members bark, bleat, or fling childish barbs and withering slights. If asked to justify what they propose, they resort to the familiar retort, “People will die.” When questioned over their failure to deliver, they simply reply with vague, feel-good statements. When pressed into debates over the abstract merits of their proposals, other than providing memorized statistics or figures, they rely on shibboleths at the expense of accuracy, respond to intricate questions on policy matters with inanities, and pose as prophets defending the collective will of the people. A class of aldermen with little intellectual curiosity, the caucus members have no real interest in mastering issues, and little ability to carry on a coherent conversation on the minutiae of most policy matters. They just wing it, and they wing it quite poorly. Rhetoric and promises never to be fulfilled, this sophomoric idiocy would be utterly laughable if not for Chicago’s media, which nurtures the belief the group should be taken at face value, as serious political power players.

The Socialist Caucus is not searching for any solution. Instead of brainstorming fascinating new approaches to solve Chicago’s stubborn difficulties, the Socialist Caucus seeks to empower the state, largely through high taxation and offering disincentives to work, primarily through ever-expanding entitlement programs. This is, however, the unique quality about the socialist fantasy: It provides miracles if the details are hidden.

If Chicagoans have anything to learn about the Socialist Caucus’ call for the Fed to issue zero-interest loans, it is that its six members operate in a fantastical and dangerous fog. These elected leaders consistently and habitually overpromise and underdeliver. Their sinister intentions, cloaked under the veil of “community organizing,” can be difficult to detect, and often reveal themselves when their constituents least expect.