What to Expect In Kim Foxx's Second Term 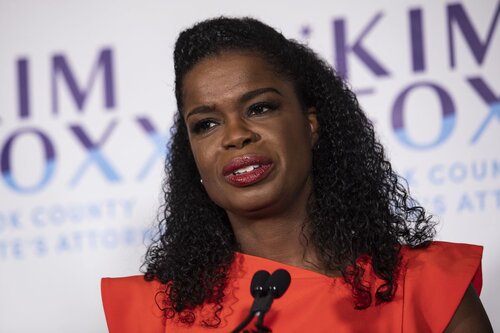 The subconscious checks which control Bill Conway’s inner monologue apparently malfunctioned on the evening of March 17. Just past seven p.m. on Saint Patrick’s Day, when Conway accepted his bid to unseat Kim Foxx in the Democratic primary race for state’s attorney had floundered, he told supporters in his concession speech he had placed a call to Ms. Foxx acknowledging defeat. A call all candidates for public office dread, when describing the conversation with Foxx to admit his trouncing at the ballot box, Conway revealed he had congratulated Foxx on “winning a second term as Cook County State’s Attorney.”  Though a lapse, Conway knew in his marrow the truth and consequence of his primary defeat. Above all, Foxx knew the implications of her triumph over Conway: Though Foxx faces Patrick O’Brien in the November general election, barring an incident of Biblical proportion, Foxx’s re-election to a second term is virtually assured.

Two hours after Conway and Foxx spoke by phone, Foxx took the rostrum at the Hotel Essex Chicago. Addressing her supporters, Foxx glowed with a soft smile. Those who were able to stomach watching Foxx’s victory speech bore witness to familiar words, all the bits and bobs of an exceedingly boring stump speech. Words met with a sedate response, in a speech which will almost immediately be forgotten, Foxx’s eyes shifted between teleprompter screens as she checked off a list of accomplishments from her first term. Achievements more often associated with an attorney practicing with a civil-rights law firm than an elected prosecutor, virtually every item in the address had been heard before but was re-introduced with a greater passion and urgency amid the emotional election-evening atmosphere.  Dusting off old promises, Foxx pledged to seize on her primary mandate to continue criminal justice reform while maintaining public safety, invoked James Baldwin, and blurted out her preferred buzzwords “fair,” “just,” and “equitable.”

Though every item on her dreary laundry list of achievements had a tired feel to it, Foxx’s victory address gave Cook County residents a distressing glimpse into her intentions for a second term. While Foxx’s first term has, at best, been calamitous, she was able to convince a sufficient number of voters to return her to office where she is almost certain to continue to recycle the harmful and ineffective policies she has peddled for the previous four years.

Kim Foxx is a time bomb, and no one seems the least bit interested in defusing her.

Though Ms. Foxx declined to advance any specific policy proposals in her victory speech, there is every reason to believe Foxx plans to use the broad authority of the State’s Attorney’s office in her second term to codify her frenzied and novitiate understanding of the prosecution of crime into a doctrine. A glum truth, this means Chicago residents need to be prepared to face the reality violent crime, particularly homicides and certain property crimes, will continue on an upward trajectory in Foxx’s second term. As Chicago experiences a boom in violent crime, to distract from her failed reform policies, Foxx will continue to shift the conversation from criminals and crime itself and cast blame for crime and criminal behavior on social conditions, a biased justice system, the essential need for mental health treatment or weakened gun control laws. While Foxx has maintained her “holistic” policy prescriptions to confront crime have resulted in a decline in violent crime, it is fair to say the full weight of her holistic principles required two years in office before being fully experienced. While Foxx has stated with false modesty homicides decreased in her first three years in office, Chicago homicides in the first three months of 2020 soared in comparison to the same period in 2018 and 2019. A chilling presaging into her next four years, Chicago residents also need to be mindful of the fact property crime, some of which can involve use of a firearm, will also climb. Crimes which encompass retail theft, burglary, simple theft, and carjackings, of the four, the sharpest increase will occur in retail theft and will be carried out by a growing number of organized retail theft rings. A crime which persists unchecked in Chicago, the flux in retail theft is nearing a crescendo and could provoke the shuttering of retail stores and prompt retailers to abandon the city for retail shopping malls in the suburbs.

While most of what Cook County residents have experienced under Foxx is enough to send a shiver up the spine, there is the potential Foxx will use a second term to keep her first-term policies firmly in place and unveil new measures. Although Foxx has admitted the need to refine some of her reform package, it is doubtful Chicago residents will witness Ms. Foxx weigh any changes to her office’s procedures regarding bail or plea agreements. Residents should brace themselves for a continuation of permissive bail conditions for violent offenders, and for Foxx to call for an end to what she could brand as “mass supervision” to place a shroud of mist over her office’s failure to pursue consequences for violations to parole or probation. A step Foxx is likely to take under the guise probation and court supervision deprives one of liberties, we should similarly anticipate no substantial change in Foxx’s habit of tendering merciful plea deals to violent offenders or either the reduction or withdrawal of charges against violent offenders for serious transgressions of the law. Regarding juvenile crime, it is a distinct possibility we will soon become eyewitnesses to Foxx requesting the closure of juvenile detention facilities and its replacement with the creation of juvenile homes occupied only by violent youth.  Foxx is, needless to say, a woman more absorbed with lower incarceration rates than lower crime rates. Using the flawed foundation on which she built criminal justice reform upon election to office in 2016, Chicago residents should equip themselves for Foxx to broaden her reform measures to include the decriminalization of quality of life laws in her second term. Measures Foxx will adopt under the pretense it “decriminalizes poverty,” this, of course, means Chicago residents will soon become familiar with homeless persons defecating or urinating in public. As well, Chicago parks or open spaces will soon be taking a littered look with used syringes cluttering the landscape as they are transformed into open-air drug markets. Above and beyond human excrement and drug use becoming prevalent in the public square, we should anticipate the nuisance of widespread panhandling to return, and both public intoxication and farebeating on public transportation to become commonplace.

A one-woman truth and reconciliation commission, some of Foxx’s unfinished business rests with vacated convictions. An obsession with which Foxx treasures more than rubies, Chicago residents should expect Foxx to continue to fall to her knees and suspend all critical thought in front of violent felons pleading innocence. Following yet another round of vacated convictions, Chicago residents should be willing to brook living among habitual offenders and bear the financial cost of ridiculous litigation as career criminals aim to settle scores with Cook County’s justice system.  Cook County residents also need to make ready for long-term changes in the State’s Attorney’s office. According a source inside Foxx’s office, a growing discontent with Foxx may induce a mass exodus of competent assistant state’s attorneys to private practice. Frustrated with Foxx’s reform measures and the shape and direction the office has taken under Ms. Foxx, any significant turnover will enable Foxx to enlist young attorneys, who, like Foxx, share a cynical view of the justice system and read from a Progressive gospel.

Though a pessimistic outlook for the immediate future of Cook County under Foxx, Chicago residents may find salvation if the Justice Department intervenes locally. Over the past several months, Attorney General William Barr has devoted more public appearances to assailing the sickness brought on by Progressive prosecutors. Inveighing against Progressive prosecutors nationwide as “rogue,” though Barr has not mentioned Foxx specifically in any public appearance, he has maligned Progressive reform measures for leading to “more crime” and “more victims.”  Although the U.S. Attorney for the Northern District of Illinois, John R. Lausch, has yet to remonstrate with Foxx over her chaotic policies, it is possible he could challenge Foxx publicly if sufficiently motivated.  Barr, thankfully, is not alone: In a strident objection to Progressive extremism, the U.S. Attorney for the Eastern District of Pennsylvania, William McSwain, has openly rebuked Philadelphia’s reformist district attorney, Larry Krasner.  While the Pennsylvania General Assembly did recognize the urgency to pass legislation to empower the state’s attorney general to prosecute gun crime Krasner has elected to ignore in Philadelphia, it is unlikely the Illinois General Assembly would sponsor a bill limiting Foxx’s overreach, less likely Governor J.B. Pritzker would sign similar legislation, and unthinkable Attorney General Kwame Raoul would support any legislation defying Foxx.  With Springfield forsaking Chicago, the Justice Department and Lausch remain Cook County’s hope for consolation.

Chicago has a history of getting it wrong, terribly wrong.  Although the election of Foxx was a dangerous error and Cook County voters are on the verge of repeating the same mistake, seven months is a lifetime in politics.  While few obstacles remain for Foxx, one foreseeable tripwire is the investigations over the Smollett fiasco. Although Cook County Inspector General Patrick Blanchard and Dan Webb are conducting inquiries into the matter, and Webb’s review did re-indict Smollett on six counts, neither inquiry will prove fatal for Foxx. There is, naturally, another side to the Smollett story and Chicago’s agonizing crime epidemic, but Chicago residents won’t read about either in Chicago journalism. An industry which serves as the propaganda arm of the Foxx campaign, its weather vane perpetually points away from Foxx despite shifts in wind and will do what is needed to drag Foxx across the post.

The Typhoid Mary of Chicago politics, Kim Foxx is taking Chicago into a terminal decline.