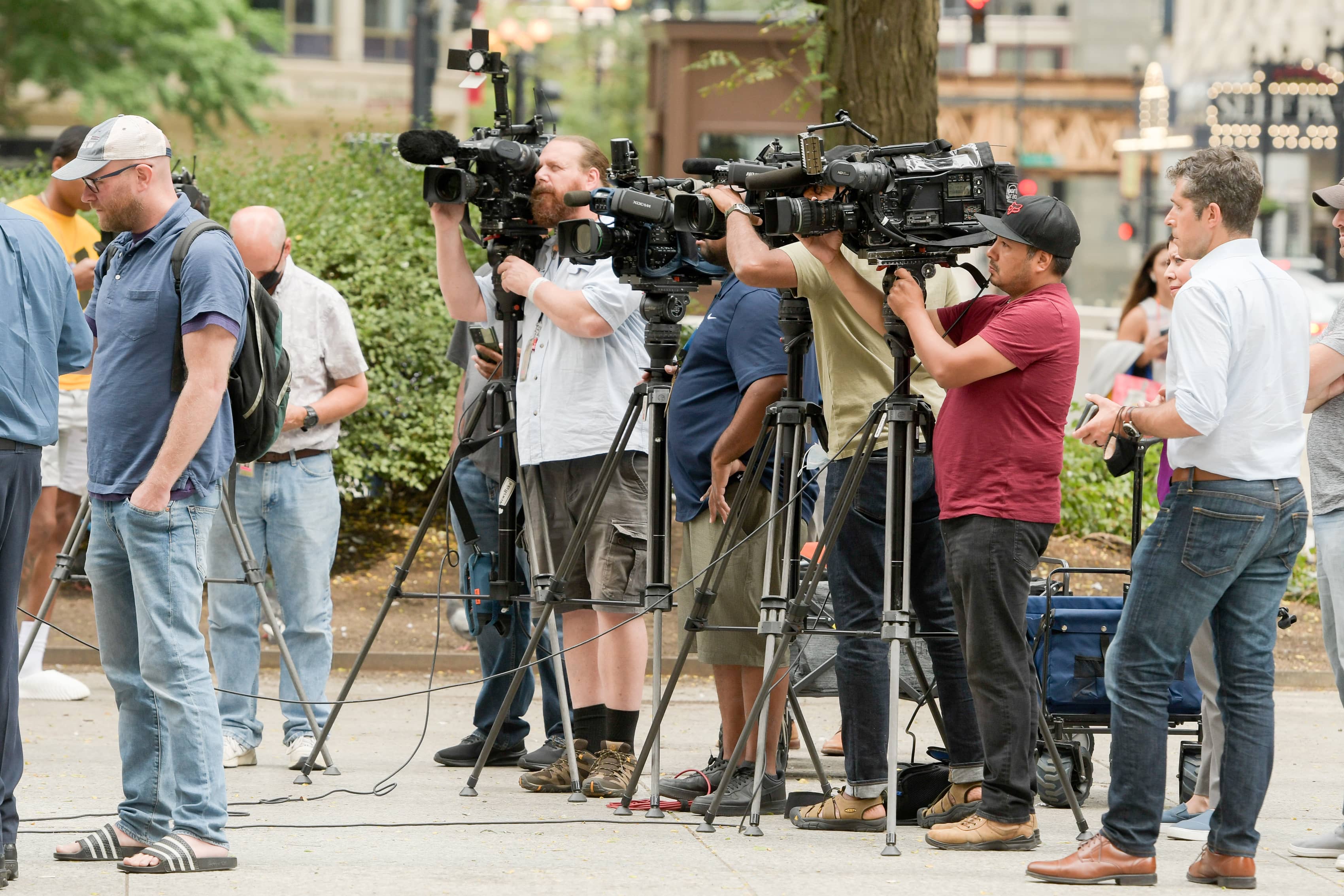 The death of the political interview

Poor Kim Foxx. The Cook County State’s Attorney has suffered so many hardships over the past year and a half. Since winning re-election to a second term in November 2020, Foxx has faced unsparing scrutiny for crime’s relentless march across Chicago and the contradictory and halting manner in which she has addressed it.

Though it is practically a rule of hers to avoid substantial contact from media, because crime is not disappearing from the headlines as Foxx hoped it would, Cook County’s comically incompetent prosecutor recently sat with Crain’s A.D. Quig for a 45-minute podcast, A.D. Q&A. Cosseted in Crain’s comforting embrace, Foxx faced neither a grilling nor even a light braising when being cross-examined by Quig. Rather, with striking deference, Quig insulated Foxx from annoying questions, posed safe and largely predictable queries, and allowed Foxx to control the interview from commanding heights.

Opening the conversation between the two, Quig allowed Foxx to lament the backlog created by the pandemic and describe how her office has disposed of cases. Foxx was then given time to praise Cook County’s public defender, Sharone Mitchell, as sober and judicious, a man with whom Foxx admitted shares the same goal: Justice and truth.

Without any interference from Quig, Foxx then segued into a rhetorical flourish about past injustices in Cook County, namely Operation Greylord, disgraced ex-police officer Ronald Watts, and, naturally, Jon Burge. Posturing as self-righteous for her fans, Foxx also mentioned Chicago’s reputation as the “false confession capital” of America and pointed to racial inequalities, and poverty.

Asked by Quig about the relationship between Assistant State’s Attorneys and police officers, Foxx insisted the bonds between both her office and officers remain strong, but emphasized the need for police to be credible in prosecutions her office conducts.

As the pair moved along with their chat, when Quig raised the delicate matter of chronic reoffenders, the data-obsessed Foxx swiftly mentioned several discredited studies on criminal justice reform, which she says dispute that Electronic Monitoring and bail reform are at the root of Chicago’s shocking upsurge in crime. Foxx continued to declare that critics are taking a “shortcut” by not acknowledging all the facts related to reform.

Asked by Quig about obstacles to solving Chicago’s intractable crime, Foxx, again, transitioned into an extraneous aside over her upbringing at the scabrous Cabrini Green housing project and bemoaned the absence of synergy among Cook County’s political leaders to mutually agree on an anti-crime strategy.

On her record as prosecutor, Quig then raised the issue of Foxx’s office dismissing thousands of charges against rioters who sacked Chicago in 2020. Placing a fresh and attractive gloss over her ruinous term, Foxx maintained refining her office’s prosecutorial goals to deemphasizing retail theft and drug offenses has allowed ASAs serving under her to prioritize gun offenses. An attempt to burnish her record, Foxx made no mention of, nor was she pressed by Quig to discuss, the extraordinary violence surrounding drug crime, how addicts, too, commit crimes or the sharp, upward trajectory in retail theft since Foxx took office in 2016.

When examining gun crime and carjackings, Quig allowed Foxx to construct an elaborate scaffold of excuses for the rise in crime by faulting police for arresting offenders who unlawfully possess a weapon rather than ferreting out those who use a firearm in the commission of a crime. Hewing to Foxx’s excuses and explanations, Quig then permitted Foxx to cast blame on the pandemic, school closures, and the fraying of the social-safety network for the epidemic of carjackings.

However, for listeners to have a proper appreciation for how bizarre the gabfest between Quig and Foxx became, one of Quig’s final questions essentially handed the reins of the interview to Foxx, by asking: “What have I not asked you want to talk about?” Taking Quig’s cue, Foxx embarked on a tortuous soliloquy about the need for investment in dismal enclaves of the city, how she is wracked with survivor’s remorse over her upbringing in public housing, and suffers the “slings and arrows” of her critics.

An interview which served no public-information purpose whatsoever, if there is one takeaway from Quig’s “interview” with Foxx, it is political interviews in Chicago are a relic of another era.

Media Q&A's once illuminated an elected official’s political stance and behavior in office to leave an audience better informed so voters can makeup their own minds. Though we're currently in an age where the culture of sound bites and the dark art of media spin dominate, Quig squandered an opportunity to pose serious questions to Foxx about her term in office. While elected officials have developed effective techniques to frustrate probing interviews or avoid rising to any bait, Quig declined to hold a probing, in-depth interview with sometimes difficult questions for Foxx.

Although no Rottweiler interrogation of Foxx was expected of Quig, with Chicago a nervous, disordered city, one would have anticipated Quig to quiz Foxx on her flawed record on prosecuting crime or her sins in office. Had Quig taken on Foxx properly, she would have asked Cook County’s prosecutor if her forceful advocacy for the elimination of bail and pretrial detention had provoked an increase in Chicago’s homicides in 2021.

Moreover, had Ms. Quig demonstrated any inquisitiveness, she could have asked Foxx for any reaction to conflict among her subordinates over her endless exonerations or Foxx’s bungling of the Smollett matter. Also missing from Quig’s interview with Foxx was any mention of soaring retail theft and the staggering number of offenders committing felonies while on bail awaiting trial.

An effort to whitewash Foxx’s track record of getting it wrong, and disastrously so, perhaps Quig’s cleverest maneuvering in the tête-à-tête with Foxx was avoiding Foxx’s ideological obsession with “wrongful convictions” and releasing killers from imprisonment.

A matter which merits serious scrutiny and deserved in-depth questions, Quig abstained from putting questions to Foxx over her office genuflecting to the designs of her fringe-Left political allies and benefactors. A matter ranging from the Smollett scandal to the release of convicted killers under dubious claims of torture at the hands of police, Foxx’s term in office has revealed her to serve as an agent in a radical movement committed to overturning law and order, justice, and protections for legitimate victims of crime.

Though Foxx’s actions urgently demand a federal investigation, a complicit media and a politicized Justice Department prevent an official probe.

Quig, of course, had other ideas for her interview with Foxx. Though this is not the first time Foxx enjoyed some gentle treatment from the political press, Quig framed her sit down with Foxx to avoid inflicting any political damage and to minimize accountability. Political interviews should be courtly, yet they should yield answers even if this means holding a public figure’s feet to the fire.

To Crain’s and Quig, Foxx must be viewed by the public as a determined rebel, a shieldmaiden, a warrior woman. Crain’s, obviously, wants us to see Foxx as a keen and thoughtful prosecutor and a hero in the war on crime, which is precisely why Quig preferred a rather tranquil interview style as if she and Foxx were enjoying a glass of chardonnay while the two compared notes as opposed to a neatly conducted media interview imbued with pertinent, cogent, and difficult questions.

A free press shines a light on dark places, telling stories which otherwise would go untold. A free press also gives public officials a platform to make arguments for what they believe in and both challenges and holds public officials to account. Instead of a legitimate interview, Quig gave the audience a bizarre, starry-eyed veneration of a particularly fallible woman and allowed Foxx to sketch out a transformative vision for Chicago, pontificate piously about a progressive wish list, and bang on about some unappealing chapters in the history of Chicago.

A.D. Quig’s interview with Kim Foxx pointed up a central and enduring problem for Chicago media: It once again revealed the comfortable, traditional relationship media has with liberal politicians in Chicago.